In May 2021, the Conference on the Future of Europe was launched as a call to action for citizens to help determine the next decade’s priorities for the European Union. As part of this process, EYCA held its own campaign to get young people involved in this process.

#StandForSomething, as this EYCA campaign is known, brought together a group of youth activists from across Europe to act as multipliers and further engage their peers in discussions about the Future of the EU. The aim was two-fold: get young citizens excited about participating in this unprecedented participatory democracy exercise; and make sure the priorities identified by young people are taken into account by political leaders.

With these objectives in mind, the youth activists – with the help of EYCA members – embarked on the long road to shaping the Future of Europe. Collectively, they organised 262 online and in-person events in 17 different countries. They were joined by an impressive 9956 participants, and notably 16 MEPs as well as a handful of national decision-makers. Overall, this campaign reached 11 million people across Europe and beyond. 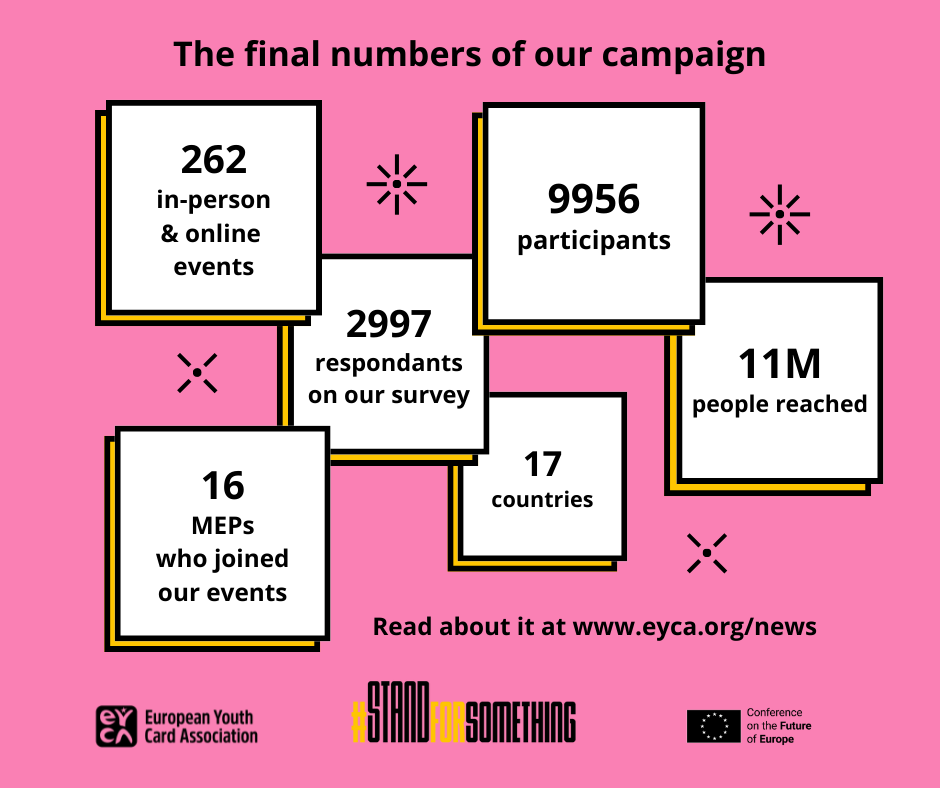 Numbers are not the only way to measure the success of a project. And especially when it comes to youth participation, actions often speak louder.

The ideas collected by the youth activists were included in the Future of Europe process directly via the official online platform and indirectly through a report drawn up by two academic researchers. The latter was shared widely with decision makers as well as civil society stakeholders (available here).

While of rich variety overall, many ideas deserve praise for their fresh perspective. For instance, with sustainable travel becoming a priority for many, one idea centred on the introduction of a European Public Transport Card. This suggestion would encourage the use of local routes for adventures and make travelling more affordable (read full idea).

Of similar diversity were the outreach events organised by the youth activists. From protests and festivals to ad-hoc street actions and film screenings, the mix of activities aimed to reach as wide an audience as possible. Where possible, cooperation was favoured with existing groups such as the scouts, schools and youth camps. And naturally, COVID-19 meant that imagination was needed to hold several activities online.

All in all, the success of this intense but hugely gratifying campaign is down to the youth activists themselves. The energy and wisdom of young citizens is a valuable resource too often overlooked. One youth activist summed up the campaign superbly: « it’s really out on the streets and in collective action that you get a feeling for what it means to live, love and shape democracy. »